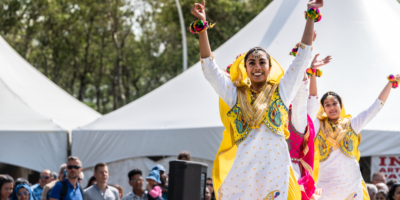 On July 31, 1987, a devastating tornado ripped through the city of Edmonton. What many Edmontonians have come to call “Black Friday” occurred the weekend of that summer’s Heritage Festival. Current executive director, Jim Gibbon recounts his memory of that weekend to me over coffee at a downtown cafe.

“The entire city ended up coming down to Hawrelak that weekend to build the park back up. We were in action by Sunday morning.”

He remembers Laurence Decore, Edmonton’s mayor at the time, saying that Edmonton really is a city of champions because of the festival’s community cleanup in the aftermath of Black Friday.

Gibbon wishes we never let go of our original brand “The City of Champions.”

“Who cares about the Cup,” says Gibbon. “It’s not about that. It’s about a city coming together in times of need. It’s about the way we take care of each other.”

Gibbon sat on the board for years before taking over as Executive Director of Heritage Festival in 2015.

“When I took it over, we could only squeeze in 63 tents. It was unfortunate because most of the groups applying had to be turned away—there was no space. You’d have about a dozen groups trying out for three or four spots every year but nobody new ever got in.”

Gibbon says that they haven’t had to turn anyone down for years.

“Every cultural group that applies, gets in.”

Gibbon says that Heritage Festival has changed his life in many ways.

“Ten years ago, I wasn’t aware of the subtle racism, the little things that happen every day in this city,” something he’s much more aware of now.

On the festival website’s landing page, a statistic from a July 2020 IPSOS REED poll says “The majority (60 per cent) of Canadians see racism as a serious problem in Canada today. Nearly a third of Canadians say they have personally experienced racism in the past year.”

“The most important part of Heritage Fest, if you look at the way it works, from pavilion to pavilion, you learn how we’re all so different and we’re all very much the same. People just want to raise their kids in peace and safety like everybody else.”

He adds, “Taking the unknown other and turning them into a familiarity changes everything in your world.”

One of the mandates for Heritage Festival is to preserve diversity. This is important to Gibbon who says he wouldn’t want to live in a melting pot society where everyone is expected to blend in.

“I want people four or five generations down to be celebrating, to remember their ancestors and their ancestral stories.”

Which is why Gibbon believes amplifying and protecting Heritage Festival is important for the city.

In 2019, Heritage Festival received $9,000 in funding to advertise in Calgary which increased out of town visitors from 9 per cent to 16 per cent. This increased visitors by thousands, not only bringing people to the event itself but also “putting heads in beds”, which is great for Edmonton tourism.

In 2017, Heritage Festival hit a record of 460,000 visitors. With more funding and advertising, Gibbon is hoping to see numbers like that return in the coming years.

Heritage Festival 2022 runs from July 30 to August 1 at Hawrelak Park.