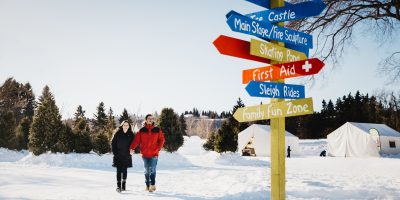 Behind the scenes of Edmonton’s longest-standing winter festival

It’s the season of very little sleep for Erin DiLoreto.

As the executive producer of the Silver Skate Festival, DiLoreto and her team have been at work for weeks to prepare for Edmonton’s longest-standing winter festival which lasts 10 days at Hawrelak Park.

She gives credit to her team, but there’s no denying that DiLoreto pours her heart and soul into the event, which is why sometimes she’s been known to find a place for a quick nap in the pavilion at Hawrelak Park.

“I think that it’s the passion and love of what you’re doing,” said DiLoreto. “I don’t have to be that person and my Board of Directors has told me multiple times ‘you know Erin, you don’t have to live there.’ But when you’re an A-type event personality that just has to be there… it’s like birthing a child, I spend 10 months prepping for this baby.

“I’ve gotten better, but when there’s full programming on the weekends of the festival, I’ve been known to be here for the start of the skate races at 8:00 a.m. up to the [fire sculpture] burn that happens at 8:00 at night. But again, that’s on me, I’m getting better at that.”

This will be DiLoreto’s 16th Silver Skate Festival; she started as an administrative assistant to the producer of the modern-day version of the festival which kicked off in 2005. The festival, though, started in 1990 as a formal society; the Dutch Canadians Club and Edmonton speedskating community would come together for a day of races and food at Hawrelak Park in the heart of Edmonton’s river valley.

It has evolved into an extravaganza of arts, culture, sport, recreation and culinary delights. There’s snow sculpture building, skate races, live music and the list goes on. The festival continues to evolve, which is part of the challenge that DiLoreto loves after a decade and a half with the event.

“Every day I’m surprised about learning about a new arts organization, or a new artist or an installation piece,” said DiLoreto. “There’s just so many great things and so much untapped fun that can happen here at Hawrelak Park.

“I love the community, the city of Edmonton, I think there’s a great demographic that like to build community and elevate and celebrate who we are.”

It was in 2012 when the City of Edmonton launched a WinterCity Strategy with partners, including Explore Edmonton (then Edmonton Tourism), to reclaim the joy of winter. Rallying around the snowy season has been a game changer for DiLoreto and the Silver Skate Festival.

“You can see the spike in our attendance,” said DiLoreto. “You can see, along with my winter festival peers, that it just helped amplify what we’re doing. The credit goes to community working together.”