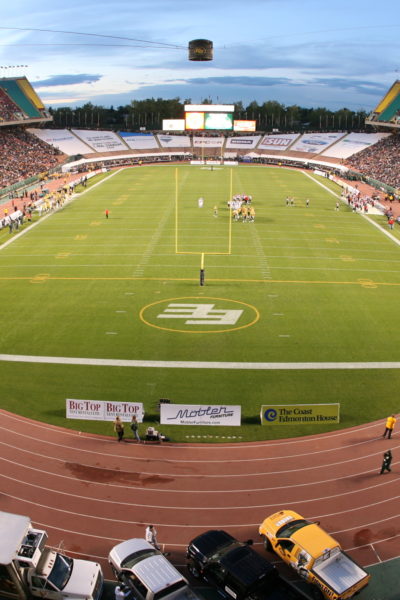 No team in Edmonton draws more devoted fans to a home game than the Edmonton Eskimos. The beloved Eskies are one of the most storied franchises in the country and have a long history of remarkable on-field victories. Plan your visit to Commonwealth Stadium to see an afternoon or evening of action-packed Canadian football.

What You need to know

The Edmonton Football Team is a professional team and member of the Canadian Football League (CFL). The current team was founded in 1949 and borrowed their now-famous Green and Gold uniforms from the University of Alberta. Humble beginnings gave way to continued success however as the team is the most dominant franchise in modern Canadian football history, winning 14 Grey Cups and have more playoff appearances than any other team.

Football is football (unless it’s soccer, of course) right? Though North American football evolved from the same rugby roots, there are actually significant differences between how it’s played in Canada and the United States. Both games are exciting but here are a few key pieces that make our Canadian version unique.

Canada is known for its open spaces and our football fields are no different. They’re 110 yards long, 65 yards wide and have end zones 20 yards deep. This compares to the 100ft x 53ft and 10-yard end zones south of the border. Lots of room for our stars to run!

The two countries share six-point touchdowns, three-point field goals and two-point safety touches but we crazy Canadians added in another wrinkle, the rouge. This one point is scored when a kick of any kind sails through the end zone, other than on a made field goal. On a kick that stays in the end zone, a player receiving the ball can choose to kneel and concede the point for the benefit of getting to start their next play on the 35-yard line. It might sound confusing but it can provide some entertaining and unique scoring situations not seen south of the border.

In Canada, we like everyone to play so we let one more player per team on to the field at 12 rather than the National Football League’s 11. American quarterbacks who come up to play in Canada often say the biggest change for them is getting used to this additional body trying to defend them.

Lower Bowl seats get you close to the hard-hitting action, but not too close! Even lower bowl seats maintain a sufficient viewpoint so you can still see complicated plays develop.

Here for the Party

Consider yourself on deck to party? Then the perfect spot for you is on one of two Party Decks - see what we did there? These standing areas are located in the lower bowl near the end zone so you’ll be perfectly situated to celebrate that big touchdown

As the largest open-air stadium in all of Canada, Commonwealth has plenty of seats in the upper bowl that provide a great vantage point. The upper bowl is often home to the most vocal of fans, so be prepared for a high energy section.

Getting to Commonwealth Stadium is an easy experience if you plan ahead.

A mixed-use pathway for cyclists and walkers follows the Capital Line LRT north/south allowing for easy access from downtown. Bike racks are available at Gates 2, 6, 9, and 13.

There is no parking on-site during CFL games so taking public transit is highly recommended. Northlands Park has parking available during most games and is just one LRT station away from Commonwealth Stadium. A drop-off zone during games is available on 112 Avenue from 95 Street to Stadium Road.

Commonwealth Stadium has limited accessible parking, available on a first-come, first-served basis. DATS service is welcome. Gates 2, 6 and 11 are wheelchair accessible. An elevator at Gate 11 is also available. Covered spectator spaces are available for wheelchair users; an attendant and two-family covered spaces are available as well. Tickets must be purchased for these seating areas. Accessible washrooms and family change rooms are also available.

Your ticket works as a free pass on Edmonton Transit for two hours before game time, during the game and two hours after the game.

Use your game ticket as your free pass onto Edmonton’s LRT and head downtown to celebrate a victory at one of the many great downtown bars and restaurants.